I hope you find some helpful tips, recipes, products and information about Celiac Disease and living gluten free – much of which I wish I had a decade ago when my oldest child was diagnosed. 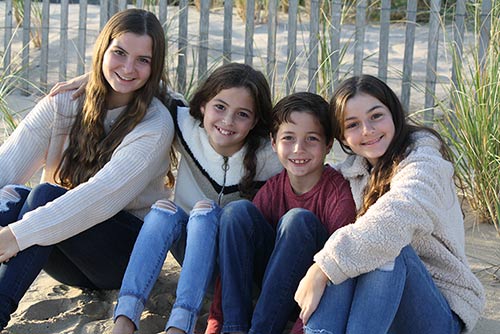 In the spring of 2009, our oldest daughter was diagnosed with Celiac Disease when she was 4 ½ years old. We weren’t aware of what was happening at first and had never even heard of Celiac Disease. She had gotten very sick which at first, we thought was a stomach virus and the doctors even tested her for salmonella at one point. Something in my gut (no pun intended) told me it was something else. We took her to a GI Specialist who ran many tests which is when we were told that her blood work tested positive for Celiac Disease. We immediately did some research on Celiac Disease and eventually took her to the Celiac Disease Center at Columbia University where she had an endoscopy and we’ve been patients ever since.

After the diagnosis and learning more about the disease, a lot of the common symptoms were, in hindsight, obvious. We had noticed she was always tired and still needed long naps. She seemed to have thin arms and legs with a distended belly. But she was still young (and our first) so we weren’t sure if it was just taking time to grow out of these things. She complained of leg pains which we chalked up to growing pains and belly aches that we chalked up to her eating too fast all of the time.

Six months after our oldest was diagnosed we tested our other two girls. Our second daughter came back positive and the other one continued for a few years with negative results. Eventually with all the same symptoms, our third daughter was diagnosed as well. Our son continues to be checked but, while he has the gene, is still negative for Celiac Disease.

Prior to becoming a mom of four, I got my master’s degree in Early Childhood and Special Education. I worked in pediatrics for many years as a Child Life Specialist. I had seen a lot of childhood illnesses but, as I mentioned, had never even heard of Celiac Disease or gluten before! I am being honest in saying when we were first diagnosed, I broke down. I was overwhelmed and anxious. But as soon I realized that this was manageable, I was on it! And though not always easy, I had seen a lot in pediatrics and knew we could handle this. Luckily with the wonderful support of the Celiac Disease Center at Columbia University and some others along the way, we have come so far. And so has the food!

At the beginning I bought every gluten free cookbook on the market. But once I realized it was about cooking the way I usually do and just making substitutions where necessary, things got much easier. Although overwhelming at times, it is manageable. Sometimes it requires a bit more thought and planning ahead but eliminating gluten from the diet does not mean you can’t eat satisfying and exciting foods, eat out or travel. Each age brings different challenges, whether it’s with school or friends. Kids want to be like their friends, and it isn’t always easy feeling different. However, we work hard at making sure our kids feel confident and safe just as their peers do and don’t let Celiac Disease or living gluten free define us.

It’s quite ironic that I’ve launched this public blog as I’m actually a rather private person and have not be active on social media until recently. However, I know what this journey was like for us in the beginning. I started this blog to help others through the journey. Along the way I hope to share what’s worked and hasn’t worked whether with food and my own cooking or with birthday parties, school and traveling. I want to share products we like and places we eat. I think together we can learn from each other and help make living with Celiac Disease a little easier. I think there is comfort in surrounding yourself by those who understand firsthand. I have already met some wonderful people along the way, and I look forward to meeting many more.

Could you use some one-on-one personal guidance?
Get In Touch